What’s the poop on tomatoes? Bethel weighs in

This past summer, 19 eager Junior Master Gardeners weighed the benefits of poop while giving back to the community in a charitable way. Dick and Maggie Bethel helped further a scientific experiment at the Kent County Michigan State University Extension Office by providing them with the world’s best rabbit poop.

Earlier in 2010, Extension educator Monica Smith suggested to Extension horticulture educator Rebecca Finneran that the “extra bounty” produced in the Junior Master Gardeners’ garden would be a welcome sight to a local food pantry known as “Kids’ Food Basket.” This local Grand Rapids non-profit provides children living in a low-income situation with a take-home sack lunch each weekday. It can sometimes be a challenge to make one that is nutritionally balanced with fresh fruits and vegetables. Rebecca loved the idea but wanted to take it a step further by incorporating a scientific experiment in the process. 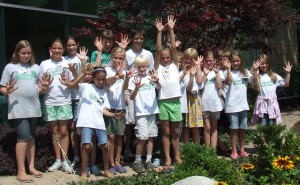 Kent County Junior Master Gardeners are not afraid to get their hands dirty this past summer.

Gardeners know that cherry tomatoes will produce abundantly with little gardening skill or encouragement. Plants that are fertilized regularly can produce exponentially compared to the volume of soil their roots occupy. The question was, how many tomatoes can a cherry tomato plant produce that has been fertilized only with animal manure? What is the best type of animal manure? How does the yield compare to a traditionally fertilized plant?

To address these questions, the youth chose “Sweet 100” cherry tomatoes to grow on their 8-foot post-and-wire system. In early June, they planted four plants per section and doused them with liquid food. To set up the experiment, the youth provided the “traditionally grown” tomatoes with a commercial slow-release fertilizer followed by supplemental feedings of liquid throughout the summer. They provided the other plants with only one type of organic amendment, which could be either compost or animal manures. The children had no problem incorporating each type of poop at the time of planting. Can you imagine the stories that went home to their parents that night?

Two of the amendments were commercially available products including composted yard waste and a new, bagged product that has chicken manure as the major component. This product was apparently a bit too hot (even though it was composted) because all of the plants fertilized with chicken poop died within two weeks of application.

The Bethels provided comparable amounts of fresh (can this stuff ever be called fresh?) rabbit poop, which Dick has affectionately coined as “RGS” (Really Good Stuff.) Most of the Kent-area MSU Extension Master Gardeners are on a first-name basis with Dick, and they know the value of his RGS! 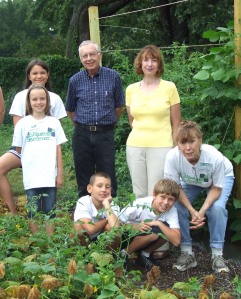 Throughout the summer, the kids visually evaluated the plant growth, and as the plants began producing cherry tomatoes, they weighed yields from each set of plants. By the end of the summer, the kids were racing out to the garden to see which poop experiment was “winning.” By all appearances, the rabbit poop plants seemed like they would be the clear winners – even steroidal looking! With huge gains on growth, dark green leaves and abundant blooms, it seemed that these would clearly out-produce any other type of growing system. As it turned out, by the end of summer, the traditional plants had nearly double the production of the organically amended plants. Students wondered if the plants loaded up on RGS were really “all show.” Even though the plants looked good, they were slow to produce a crop. The kids determined that the balance of nutrients was “out of whack” and while the plants grew like mad, perhaps they grew too much, at the expense of fruit production. What was striking, was that even the lowly plants with NO inputs, did produce some nice, red fruit. In the end, the kids had donated more than 200 pounds of cherry tomatoes to the Kids’ Food Basket (less what went into their mouths) and all were happy. The rabbits are happy, too, by the way!

One response to “What’s the poop on tomatoes? Bethel weighs in”