If the name fits …

If you work on campus or have visited lately, you may have seen workers busy tearing down Morrill Hall on West Circle Drive. I’ve heard a variety of reactions to the process, from those who wax nostalgic about the passing of an era to those who see it as the removal of an embarrassing eyesore. I thought this reflective piece by Lindsay VanHulle in the Lansing State Journal captured the mixed feelings particularly well and from an alumna’s perspective.

Even though the building that originally served as a women’s residence hall will be gone, the name of Morrill will continue to be honored. In April, the Michigan State University Board of Trustees voted to rename our own Agriculture Hall the Justin S. Morrill Hall of Agriculture.

Justin Smith Morrill was a U.S. representative and U.S. senator from Vermont from the 1850s to the 1890s. We remember him most for the Morrill Act, commonly known as the Land Grant Act, which established federal funding for public colleges and universities. President Abraham Lincoln signed the act into law on July 2, 1862. You can find a replica of the original act framed on the wall outside the auditorium at the MSU Kellogg Center. 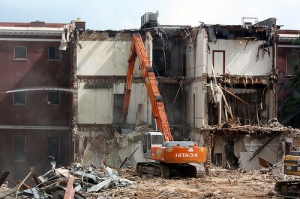 Senator Morrill’s vision of an institution of higher education dedicated to the sons (and daughters) of working class families, one that made the most recent advances in science available to farmers, families and laborers who could put those advances to work, sounded a great deal like the vision that created Michigan Agricultural College seven years earlier in East Lansing, Michigan. For that reason, we consider MSU as the “pioneer” land-grant institution, and it became Michigan’s land-grant institution shortly after President Lincoln signed the legislation.

Today, two more institutions in the state are part of the land-grant system, including Bay Mills Community College and Saginaw Chippewa Tribal College, each established by their respective tribal sponsors, and incorporated into the land-grant system through a 1994 amendment to the Morrill Act.

The Smith-Lever Act of 1914 expanded the Morrill Act, creating a nationwide Extension system overseen by the land-grant universities. Thus, the new name fits the Extension mission well. I know other Extension professionals across the country will recognize the connection between MSU Extension and Senator Morrill when they see my address.

College of Agriculture and Natural Resources Dean Fred Poston asks that we begin using the new building name immediately in all communications. However, you may continue to use any existing hard copy business cards, letterhead, stationery or envelopes with the current Agriculture Hall address until April 30, 2014.

A dedication will take place August 29 in the Justin S. Morrill Hall of Agriculture atrium.

Comments Off on If the name fits …