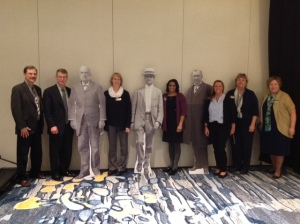 I had the good fortune of spending some time with colleagues from Michigan State University Extension at the Public Issues Leadership Development (PILD) Conference in the Washington, D.C. area this week. The conference offers workshops and features speakers on the federal side of the partnership that makes up Cooperative Extension. It also provides opportunities to meet with leaders in the U.S. Department of Agriculture National Institute for Food and Agriculture (NIFA) who support and work with Cooperative Extension programs across the country. The capstone to the conference was visiting Congressional offices to meet with elected members of Congress and their staff members to help them learn about what we do in MSU Extension to help people improve their lives.

This year’s conference had a good dose of history in recognition of the centennial of the Smith-Lever Act, which established the federal partnership with land-grant universities and county government to form our uniquely American institution. We even had life-size cut-out figures representing Seaman Knapp, Congressman Asbury Lever and Senator Hoke Smith. Knapp pioneered the concept of farm demonstration agents, which gave rise to Extension agents, and Lever and Smith were the co-sponsors of the Congressional Act, which carries their names. Lever was from South Carolina and Smith was from Georgia. The seven Spartans at the conference couldn’t pass up a photo opportunity with Knapp, Smith and Lever.

I was joined by Bindu Bhakta, Phil Durst, Deanna East, Sharon Jeffery, Lynnae Jess and Bev Przystas, each representing his or her professional Extension association.

Comments Off on Making connections in Washington, DC