Coming together to save lives: Strategic connections in District 2

Ronald Kinnunen is a Michigan State University (MSU) Extension Michigan Sea Grant educator in the Upper Peninsula. He provides technical and educational programs in his district and statewide in the areas of Great Lakes commercial fisheries and aquaculture. Michigan Sea Grant, an MSU Extension collaboration with the University of Michigan (UM), is connected to more than 40 coastal counties in the state. 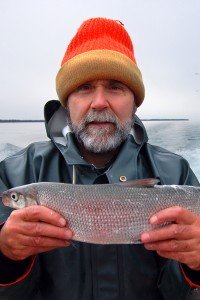 Some of the programs Ron delivers are Seafood Hazard Analysis Critical Control Point (HACCP) and Aquatic Invasive Species HACCP/Aquaculture Biosecurity. Another important program has been educating the public about dangerous currents in the Great Lakes including rip, channel, longshore, structural and outlet currents. Since 1999, Ron has built and maintained partnerships and strategic connections around educating the public about these currents in order to save lives.

Twelve-year-old Travis Brown’s death in the summer of 1998 followed a similar pattern of drownings at the Hiawatha National Forest Service Campground, and U.S. Forest Service personnel began to question the safety of their waters for swimmers. Ron and Mary Kostecki, who was the Mackinac County Extension director at the time, were the first to meet with the U.S. Forest Service on the drowning issues. As a result, Ron and Mary led the formation of the Mackinac County Water Safety Review Team (MCWSRT). They facilitated bringing many groups to the table to join the team. Team members included Travis Brown’s family, the Mackinac County Sheriff’s Department, the Michigan State Police, the Mackinac County Office of Emergency Services, MSU Extension and Michigan Sea Grant, the St. Ignace Chamber of Commerce, Allied EMS, Mackinac County 911, the St. Ignace News, the National Weather Service, Luce-Mackinac-Alger-Schoolcraft District Health Departments, the Hiawatha National Forest, First National Bank of St. Ignace, Cellular One, the Dunes Shore Resort, Moran Township, state departments of Transportation and Natural Resources, the U.S. Coast Guard and the University of Michigan Marine Hydrodynamics Laboratory.

The review team’s first task was to address drownings along the U.S. 2 shoreline and work to prevent future drownings. The group coordinated with emergency management personnel from several agencies, provided public service announcements in local media during the summer months, developed educational brochures and a traveling display, and placed signs warning swimmers of possible dangerous currents in the area of concern. Through these measures, the team was able to increase public awareness about dangerous currents along the northern Lake Michigan shoreline so swimmers and parents of young swimmers could take appropriate precautionary measures.

Additionally, the review team coordinated several public awareness days. At these events, information was presented on how dangerous currents develop and what swimmers can do to escape them. The team also provided tours of the safety stations that were placed every mile along the areas of concern. The stations include life rings, life jackets and a surf rescue board to facilitate the rescue of swimmers in trouble. The Michigan State Police and Mackinac County Sheriff’s Department now carry safety equipment in their patrol cars so they are ready to assist in dangerous current-related accidents.

“I quickly learned that these efforts would be valuable in other Great Lakes coastal communities that experience dangerous currents,” he said.

He reached out to other Great Lakes Sea Grant programs and coordinated the first Great Lakes Rip Current conference that took place in St. Ignace.

“Additional partnerships were developed in the region working with the Great Lakes Sea Grant Network where National Oceanic and Atmospheric Administration (NOAA) Coastal Storms funds were received to purchase water safety and rescue equipment that has been deployed throughout the Great Lakes region where dangerous currents exist,” Ron said.

The MCWSRT was able to accomplish amazing tasks in a relatively short time and their efforts have been effective in saving lives. People are becoming aware of the potential dangers of Great Lakes dangerous currents and that there is safety equipment available in many areas in case of an emergency.

“All the research and awareness of rip currents did not exist until Ron listened and networked the research, trained the EMT folks, networked with the Weather Channel and NOAA Weather … Ron makes connections that work,” Jim said. “By Ron listening, providing feedback, re-evaluating and networking with partner agencies, countless people have been saved because of this connection.”

Michigan Sea Grant also has been proud of the work Ron has accomplished.

“Ron has been a tremendous collaborator and community partner in the U.P. and throughout Michigan. He has covered a lot of territory for Michigan Sea Grant and MSU Extension for many years and we’ve long wanted to get him some additional help.” said Heather Triezenberg, Extension specialist and Michigan Sea Grant program coordinator. “We have just started a new partnership to house our new Sea Grant Extension educator Elliot Nelson on the campus of Lake Superior State University. Ron will play an important part in helping Elliot establish strategic connections in District 2 as Elliot develops his Extension programming to address needs in the region. However, Ron will continue to provide his training and educational expertise throughout the entire region.”

Comments Off on Coming together to save lives: Strategic connections in District 2