Thanks to all of you!

As this is my last Spotlight, I thought I would spend a little time reviewing all that we (meaning ALL of us – and especially you) have accomplished in the last year or so. At the 2014 Fall Extension Conference, we set out to make some adjustments in Michigan State University Extension that we felt would help improve the organization. We set up a series of committees and task forces including strategic connections, issue identification, MI PRS (Michigan Extension Planning and Reporting System) improvement, mentoring and several more. It was great to see how many of you engaged in these committees and proved without a doubt how much you care for MSUE. I was also really pleased to see very thoughtful work that each of the teams in each institute put into strategic and staffing plans. These forward-looking documents, along with the information gathered through issue ID, will help guide MSUE toward that more “colorful future” that interim director Maggie Bethel asked us to move toward in fall 2014. As we have talked about, teams are an important part of MSUE and that is how we “get things done.”

One team that has proven to be invaluable to me has been the administrative team that also consists of the institute directors, district coordinators, and budget and human resources leadership, along with associate director of operations Patrick Cudney and me.. I can’t thank them enough for all of the work that they do on behalf of MSUE. Patrick, in particular, has been invaluable in helping me navigate through the many issues that face the Director’s Office and the organization.

Equally important has been the outstanding support that I have received from Terri Badgley, Julie Delgado and Katie Nicpon – the folks that really run the Director’s Office. Just saying thank you very much hardly approaches the deep appreciation I have for all that they have done for me. These three folks also provide a warm and welcoming atmosphere for all who visit the office here in the Morrill Hall of Agriculture – and this is the sense of welcome that radiates throughout all of MSUE.

It has been a real privilege to serve MSUE over the last 18 months, and this time has been one of the most rewarding of my 35-year career at MSU. I have greatly enjoyed getting to know more of you and learning more about what MSUE does across the state. I also know that I leave you in very good hands with the new interim director Jeff Dwyer, Patrick and the entire administrative team.

As I look ahead, what I see for MSUE is perhaps best paraphrased from a Timbuk3 song – “MSUE’s future’s so bright, we gotta wear shades.” Best wishes for the future and thanks for all of your great work!

Comments Off on Thanks to all of you!

Update on the Agriculture and Agribusiness Institute Director

Another important transition in Michigan State University Extension has been in the Agriculture and Agribusiness Institute (AABI). Ray Hammerschmidt has been acting as the interim institute director since July 1. The search is on for the permanent institute director, as Ray moves into his new role as the director of MSU Extension on January 1, 2015.

The position announcement has closed. The search committee, chaired by Dr. Jim Kells, will evaluate the applicants, and interviews will likely be held in early January. Hopefully we will soon have an announcement for our permanent institute director. Good luck to all of the candidates!

Comments Off on Update on the Agriculture and Agribusiness Institute Director

Filed under Agriculture and Agribusiness

I can hardly believe that two months have already passed, and I have experienced so much already. Last weekend was my first Breakfast on the Farm, and it was a great experience for Dick and me. It was very well-organized by our staff and 200 volunteers. Around 2,000 other participants and I enjoyed breakfast and a beautiful educational day at DeGrins Oer Dairy near Blanchard.

At this point, Ray Hammerschmidt and I have met with every department chair and have received input on how we can strengthen relationships between Extension and the departments where we have investments and between specialists and staff. We want to have high-functioning work teams with strong working relationships and involvement with campus and field partners; quick engagement with department chairs was a priority for us.

A true highlight has been visiting the District Extension Advisory Councils. I have visited four of the councils so far. I love interfacing with our constituents and hearing their ideas/priorities for programs. My goal is to strengthen the leadership in these councils so that they could lead an issue identification process for us that would set the priorities for the direction of Extension programs in the state.

I have been out to some of your programs – but not enough yet! I love doing that! Seems there are just not enough hours in the day. In addition to Breakfast on the Farm, I was able to get to Chatham for their field day, I saw the Summer Day Camp program up close and personal at Tollgate, I experienced the rain simulator at the Lake City Experiment Station (fascinating!) and just last evening, I attended the MSU Extension Evening in the 4-H Children’s Garden. I hope to get out to more programs before my six months are complete, but I do need to tend to the administrative duties too!

I want to say thank you for making me feel so welcome in coming back. I am really enjoying the interactions and return visit to MSU Extension!

Comments Off on Reflections at Two Months

I grew up in LaGrange Park, Illinois, a village just outside of Chicago. My dad, like many in his family, was a carpenter, and my mom was a homemaker.

As far back as I can remember, I was interested in science. I attended Purdue University with the intention of becoming a biology teacher. However, shortly after I arrived at Purdue, I realized my interests were more in biology and chemistry. I was able to combine those interests by switching my major to biochemistry and in 1974 received a B.S. degree. Biochemistry was, and still is, in the School of Agriculture at Purdue, and it was through that connection and research opportunities in the Biochemistry Department that I became interested in plant pathology. I stayed on at Purdue and earned a master’s in plant pathology in 1976.

I then studied the biochemistry of plant disease resistance at the University of Kentucky, where I received a Ph.D. in 1980. 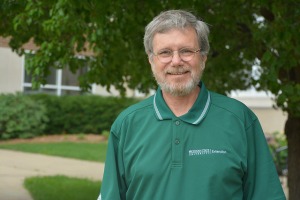 In 1980, I received a research and teaching appointment at Michigan State University doing fundamental and applied research on potato diseases. It was through the “applied” work that I became involved with Extension, talking to growers. Although I had no Extension appointment, I worked closely with specialists and became familiar with Extension’s role.

I have taught many courses and have been involved with the Diagnostics Services lab and Project GREEEN (Generating Research and Extension to meet Economic and Environmental Needs). I also direct the North Central Region part of the USDA-funded National Plant Diagnostic Network. For nearly 13 years, I was chair of the Plant Pathology Department.

My time at Purdue was significant not only in steering me toward my life work but also in introducing me to my life partner. Many of you may know my wife, Pat. We met on the first day at a freshman mixer.

Pat also had her sites on teaching and received a B.S. in vocational home economics from Purdue. She then went on to receive an M.S. in food science from Purdue.

At Kentucky, while I earned my doctorate, Pat taught in the Foods and Nutrition Department. In 1979, she began doing nutrition programming for Kentucky 4-H.

She started with Michigan 4-H Youth Development in 1981 and became state program leader for nutrition. Later, with organizational changes, she became nutrition program leader with Children, Youth and Families. Our two children, Eric and Sara, were often the guinea pigs for many of the projects Pat was involved with. Our kids were involved because we were involved, and we have many great memories of those times.

Today, we have one beautiful granddaughter. We enjoy visiting our children who both live in northern Virginia. We like to garden and cook, and drive around Michigan visiting microbreweries and wineries, and seeing the sites around this great state.

I’m honored and thrilled that Dean Poston invited me to become involved in Extension administration. Since I’m primarily a researcher, I like to take a problem, gather all relevant information, and think about ways we can solve it. We use research to make improvements. Any research we do is not complete till the information discovered gets out and we can use it to make a difference. That’s what we do in Extension, and I look forward to being part of that process with you.

Comments Off on My story

Laying out goals for a smooth transition

In just the short time that I’ve been back, I’ve been quite impressed with everything Michigan State University Extension is accomplishing. There’s so much opportunity ‒ I’m excited to be back and be a part of it.

Interim associate director Ray Hammerschmidt and I would like to share with you some of our goals.

Our first mutual goal is for a smooth transition. In addition, we want to affirm that there are no plans for a massive restructure in the organization or in structural changes. While we do not plan to make significant structural or organizational changes, we are open to making improvements in functions and operations based on input from faculty, staff, citizens and partners. Ray and I encourage you to give input to us in whatever ways you feel comfortable. Send us an email whether it’s through your institute director or through district coordinators(bethel@msu.edu or hammersr@anr.msu.edu). We will also be talking to you face to face as we visit throughout the state.

We want to support an environment where collaboration, innovation and creativity can flourish based on a timeless core set of values. When we follow values, we can collaborate and innovate; creativity is rewarded

As you are aware, I will be MSU Extension interim director for the next six months and Dr. Hammerschmidt will be interim associate director during that time. In January, I will leave the role and Ray will become the director. Dean Poston’s goal is to have the next College of Agriculture and Natural Resources (CANR) dean select the next permanent director of Extension. The college anticipates beginning the search process for the CANR dean this fall. If the new dean is in place in 2016, then he or she would begin the search for the director of Extension at some point in 2016.

Ray knows and understands a great deal about Extension so my role is really to spend time with him getting him acclimated to the role of an Extension administrator. The external search for the associate director of programs (to replace Ray) will begin in late fall. We anticipate having an associate director of operations filled internally in place by October 1. (See a map for the transition plan on the July 7 webinar at 20:18.) Ray will be leading the Agriculture and Agribusiness Institute (AABI). He and I will meet with AABI work group leaders on July 18.

Listen for more organizational updates on our weekly webinars. You can download the latest webinar here: https://connect.msu.edu/p68qmmpq1wa/

Comments Off on Laying out goals for a smooth transition