There’s a terrific project that gets kids excited about reading through their natural love of animals. The Horse Tales Literacy Project (formerly the Black Stallion Literacy Foundation) pairs little readers up with horses. The kids read Walter Farley’s Little Black, A Pony to horses at the Michigan State University Horse Teaching and Research Center on Forest Road near the MSU campus.

In addition, the kids visit interactive activity stations where they learn about various horse-related subjects such as horse nutrition, and tack and equipment.

If you’re free Tuesday, May 20 from 8:30 to 11, you can volunteer for an opportunity to be a part of this event. Volunteers will either hold horses as the kids read to them or they will help coordinate the activity stations.

Karen Waite, senior academic specialist in the MSU Department of Animal Science and the Extension Children and Youth Institute, coordinates the Horse Tales Literacy Project at MSU. Karen works closely with farm manager Paula Hitzler and the Friends of the MSU Horse Teaching and Research Center to make the magic happen.

Karen said, “This is a great way to spend part of a day. The young people are very excited about reading to the horses, and for many it is the first time they have ever been on a farm. It is fun for all involved, yet educational as well.”

You can get a good idea of the kids’ reaction to the project by watching this video and this slide show both produced by Agriculture and Natural Resources Communications. They document the time in 2010 when 135 first graders from Discovery Elementary in Williamston took part in the program. Kids from Discovery will be back again this year as they have every year.

If you think this is something you’d like to be a part of, contact Karen at kwaite@msu.edu. Just a few hours of your day will make a difference in a child’s life.

Comments Off on Volunteer to promote literacy

MSUE and Farm Bureau partner to educate students about agriculture

Three hundred students from four schools participated in activities based on the Ag in the Classroom curriculum from Michigan Farm Bureau that featured Michigan agriculture products. The students learned how farmers care for their animals, land and the environment. The activities, which match up with the state grade level content expectations for English, social studies, math and science, were a useful way to begin educating students about the value of agriculture to Michigan’s economy. 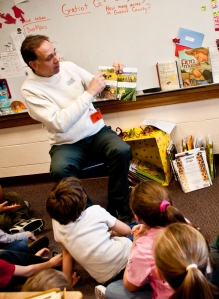 Students created a farm charm with each bead on this handmade bracelet representing one item farmers care about.

According to Katie McCune-Eisenberger, 4-H Youth Development Extension educator, MSUE is combining March is Reading Month, National Ag Week and Nutrition Month to promote a hands-on, interactive educational experience involving food, farmers and youth. Each elementary class is participating in a three-to-seven week in-class series of nutrition education and physical fitness through Jump Into Foods and Fitness and Pyramids Between the Pages.

“It’s important when we’re talking about food, we also talk about who grows and cares for the food. This collaborative effort helps students put a face to their food,” says Katie. “One farmer who read to the children grows sugar beets in the field right next to the class’s window. The class learned how the sugar on their cereal is grown right outside their window! The class now plans to intentionally observe what is happening this spring when the farmer is planting. Seven of the classes will then participate in the county’s Project Rural Education Day this fall to continue the educational process.”

It’s not every day that our programs attract the attention of three different Detroit area television stations. And last Wednesday, March 2 was no ordinary day. For one thing, it was the 107th anniversary of the birth of Dr. Theodor Seuss Geisel (Dr. Seuss). To celebrate his birthday and to kick off March Is Reading Month, the Michigan State University Extension 4-H Youth Development Ready, Set, Read! Program began distribution of an assortment of 1,000 books to children in Wayne County. The collection is part of a donation of 50,000 books by the Molina Foundation, located in Torrance, Calif., and founded in 2004 by Dr. Martha Molina Bernadett. The give-aways took place at three Detroit locations: Bates Academy, All Saints Neighborhood Center and the 4-H Community Center. At each location, Wayne County commissioners read President Obama’s children’s book, “Of Thee I Sing.” Even Sparty was on hand to celebrate.

According to Edward Scott, MSUE Wayne County educator, attendance at the 4-H Community Center was twice what they had expected with 123 kids and 15 to 20 adults attending. Said Edward, “Commissioner Bernard Parker, who did the reading at the center, was blown away by the number of people who showed up.”

Each commissioner received a copy of the book they read with signatures of all of the kids in attendance as a thank you, along with a 4-H coffee mug and a certificate.

Edward remarked, “Even high school-aged kids showed up. There was a mad dash to get the books – the kids were that excited. This really shatters the popular perception that kids aren’t interested in reading.”

Many of the books featured science-based topics. National 4-H’s goal is to engage one million new young people in science programs by 2013. As part of that goal, MSUE 4-H is focusing on science literacy among children.

Two great curriculum products are now available. Youth Take the Stage: An Introduction to Interactive Theatre was developed by Michigan State University Extension 4-H Youth Development led by project coordinator Betsy Knox. This new curriculum is a guide for adults on leading six hours of training with middle and high school age youth on being part of an issue- based interactive theater experience. Instructions for forming a post-training performance troupe are part of the curriculum. Youth are taught important life skills such as self-esteem, teamwork, empathy, problem solving and decision making. If you want to work with youth in interactive theater – even if you have no prior theater experience – this guide is for you. You can download the curriculum at the 4-H Performing Arts Page at http://web1.msue.msu.edu/msue/cyf/youth/perfarts.html.

More 4-H curriculum can be found at the 4-H Educational Materials page at http://web1.msue.msu.edu/cyf/youth/guide4h/index.html. 4-H has a profusion of materials on topics from animals to science and technology available to download from this Web page.

In this fast-paced world, it’s more important than ever for parents to spend quality time with their children. Another problem that parents face is getting their kids to make healthy food choices and to stay physically active. The recently revised Family Book Bag allows families to have fun reading together and at the same time learn about healthy eating and physical fitness. The bag is used by educators and designed to go home with a different child each week. It includes resources for educators such as an overview of the book bag, a parent letter, tips on how to set up a book bag program, incentive ideas and more. It also includes materials for families such as a Family Tip Sheet with information on making healthy food choices, being more physically active and reading with children. Five children’s books that reinforce positive food and physical activity choices are included in the bag. Families also receive eight family recipe cards. Order your Family Book Bag at the MSUE Bookstore (formerly called the Bulletin Office) at http://bookstore.msue.msu.edu/.